Director of the District Court under observation of the Allies, the UN, the Human Rights Council, the embassies, the American criminal and military police, the Russian defence attaché, etc. 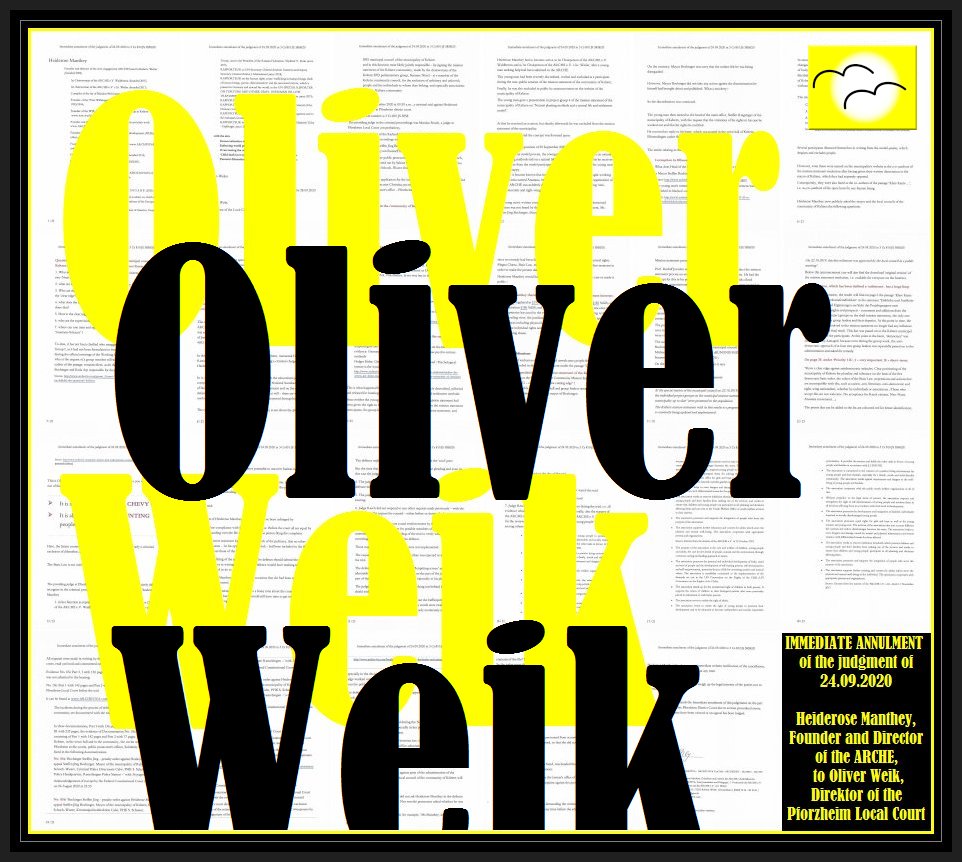 .
The World/Pforzheim/Keltern/Weiler. On 01. October 2020, ARCHEVIVA publishes the cover letter of the „perpetrator“ Heiderose Manthey, orally convicted in the criminal trial at the Pforzheim district court by judge at the district court (on probation) Martina Resch, orally convicted „perpetrator“ Heiderose Manthey publishes the cover letter to the Allies, Presidents, Ambassadors of the countries represented in Germany, UN, UN Special Rapporteur Nils Melzer, Chairperson of the Human Rights Council Elisabeth Tichy-Fisslberger and others.

Due to repeated „technical“ difficulties and malfunctions, the mail was resent today with the letter to Oliver Weik, Director of the Pforzheim District Court, and to Public Prosecutor Sven Müller of the Karlsruhe Public Prosecutor’s Office – Pforzheim branch.

A political-legal game with touching, so that others have to suffer ? Oliver Weik is SPD-municipal councillor in Keltern !

The presiding judge in the criminal proceedings was Martina Resch, a judge at Pforzheim Local Court (on probation).

The complainant was Steffen Jörg Bochinger, Mayor of the municipality of Keltern, represented by Henning von Restorff from the Ladenburger law firm in Pforzheim.

On the instructions of the public prosecutor’s office in Karlsruhe – Pforzheim branch, the investigation was carried out by Sabine Schuster, head of the Remchingen police station, and then by Ute Schoch-Wuerz from the Calw criminal investigation department.

Criminal charges and an application for the initiation of criminal proceedings were filed by clerk and public prosecutor Christina (according to the Internet) Bossert of the Karlsruhe public prosecutor’s office – Pforzheim branch.

The underlying deed in the community of Keltern

This young man had been severely discredited, reviled and excluded as a participant during the non-public sessions of the mission statement of the community of Keltern.

Finally, he was also excluded in public by announcement on the website of the municipality of Keltern.

The young man gave a presentation in project group 4 of the mission statement of the municipality of Keltern on „Natural planting methods and a natural life and settlement model“.

At first he received an ovation, but shortly afterwards he was excluded from the mission statement of the municipality.

The „ideology“ behind the concept was frowned upon.

The young man’s written complaint about his ostracism and about the threatened exclusion was not heard by the person responsible for the mission statement, Mr. Steffen Jörg Bochinger, Mayor.

On the contrary: Mayor Bochinger was sorry that the outlaw felt he was being disregarded.

However, Mayor Bochinger did not take any action against the discrimination he himself had brought about and published. What a mockery !

So the discreditation was continued.

The young man then turned to the head of the main office, Steffen Riegsinger of the municipality of Keltern, with the request that the violations of his rights in his case be worked out and that his rights be rectified.

He received no reply to his letter, which was posted in the town hall of Keltern-Ellmendingen under the eyes of a witness.

The article relating to that incident reads:

In anonymised form ARCHEVIVA publishes the letter from „Bernd Schöpfle“ (name changed) to Steffen Riegsinger, the minutes of body image participant A, the minutes of body image participant B and the letter from the ARCHE as confirmation that the discrimination was sent to the United Nations – another example from the community of Keltern for public denunciation with the knowledge of those responsible, but without their intervention.

Several participants distanced themselves in writing from the model-passus, which despises and excludes people.

However, even these were named on the municipality’s website as the (co-)authors of the mission statement resolution after having given their written dissociation to the mayor of Keltern, which they had expressly opposed.

Consequently, they were also listed as the co-authors of the passage „Klare Kante …“, i.e. as (co-)authors of the open hunt for any human being.

Heiderose Manthey now publicly asked the mayor and the local councils of the community of Keltern the following questions:

Proof: The publication of the specialist magazine www.ARCHEVIVA.com was saved by the Calw criminal investigation department and is enclosed as a CD with the criminal file on page 49 „Insult BS: H. B. Manthey ASi49 St/0810638/2020“.

This criminal complaint has not yet been filed because the first chairwoman of the ARCHE e.V. Waldbronn and the ARCHE e.V. i.Gr. Weiler, Heiderose Manthey, was active in writing two enforcement proceedings, a complaint to the Federal Court of Justice and the drafting of a constitutional complaint, which currently amounts to 4692 pages.

In the meantime, Steffen Jörg Bochinger, Mayor of Keltern, instructed Henning von Restorff, a lawyer in the Ladenburger law firm, to bring a criminal charge against Heiderose Manthey for insulting her in three cases.

In it, reference was made to three publications in which the educational journalist compared the events in wine presses with events under National Socialism. Censorship of the press, on the one hand suppressing freedom of opinion and on the other hand defaming, ostracising and excluding unpopular people at will – these are well-known methods from the National Socialist era. Art was also censored during this period.

The exclusion of the young man from the community is not about the physical killing of allegedly religiously or ideologically maladjusted people, but about a mental – psychological abuse, which is classified by UN-SPECIAL REPORTING TORTURER for Torture and other Cruel, Inhuman or Degrading Treatment or Punishment (CIDTP), Prof. Nils Melzer, in no way less in its effects than physical torture.

This is what happened here in Keltern: a young man was publicly discredited, pilloried and released for hunting because of his opinions on planting and settlement methods.

Heiderose Manthey would have been guilty if she had not reported this case or made it public !

Heiderose Manthey therefore had to act in the exercise of legitimate interests:

Go to the publications

The processes of exclusion of (unwanted and unwelcome) people from the Keltern community, recorded in the mission statement under the passage „Clear edge …“.

This is ONLY a matter of arbitrary interpretation of people who you want to throw out of the community !

Here, the future course of action of the Keltern community is clearly a criminal exclusion of (blameless, adapted and decent) people.

The Basic Law is not only seriously violated here in § 1.

All requests were made in writing by the defence, with time limits, handed over to the court, read out loud and commented on.

No. 05c Part 1 with 142 pages and Part 2 with 77 pages had been submitted to the Pforzheim Local Court before the trial.

It can be found at www.ARCHEVIVA.com:

The defence, on the other hand, was repeatedly approached in a sharp tone by Judge Resch, interrupted and not just tried to stall.

With a comparison of the methods used during the National Socialist era, Heiderose Manthey succeeded in her defence, especially in her plea, in uncovering the events in the community of Keltern to some extent.

The correspondence which took place between her, the mayor of the community of Keltern, the group leaders and others will be submitted to the public prosecutor’s office in Karlsruhe – Pforzheim branch for the purpose of filing criminal charges.

At the beginning of the trial, the judge did not ask Heiderose Manthey in the defence whether she was familiar with the files. Nor was the prosecutor asked whether he was aware of the file in its entirety.

It is stated that each party must be asked, for example, „Ms Manthey, do you know the contents of the file? The answer must be recorded.
So the judge must also ask the prosecutor. This procedure dates back to 1257 and is still valid today.

Heiderose Manthey did not even have the opportunity to ask about the file and the applications that have not yet been answered, that is how stringently Judge Martina Resch proceeded against the defence and wiped her mouth.

Judge Resch should not have opened the hearing without an answer to this question.

That is a procedural error.

Heiderose Manthey was previously prevented from accessing the full file. Pages which she had written herself were not copied, so that she did not have in her hands a file numbered consecutively.

The opposing counsel, on the other hand, was handed the file even though he and his client were not present in the courtroom.

The file was fetched and returned by the lawyer’s office of the Mayor of Berlin, Steffen Jörg Bochinger, who had filed a complaint against the prosecution, according to judicial clerk Karaasenov.

Heiderose Manthey is subsequently demanding the written rejection of her petitions, so that the reopening of the case at any time before the administrative court can be addressed.

Heiderose Manthey hereby requests immediate written notification of the cancellation, so that the defence can initiate a retrial at any time.

Judge Resch was neither prepared to weigh up the legal interests of the parties nor to be heard at all.

Heiderose Manthey demands the immediate annulment of this judgement on the part of the management of the Pforzheim District Court due to serious procedural errors, even before the minutes have been viewed or an appeal has been lodged.