Grandma Agnes: „I believe that the world is facing a water conflict.“

Karlsruhe. Despite really hot summer weather already on the first day 700 people headed into the Schwarzwaldhalle (Black Forest Hall) in order to take part at the First World Congress of the Indigenous Grandmothers for Health, Awareness and Healing the Earth – „13 Grandmothers – Be part of the Change!“ 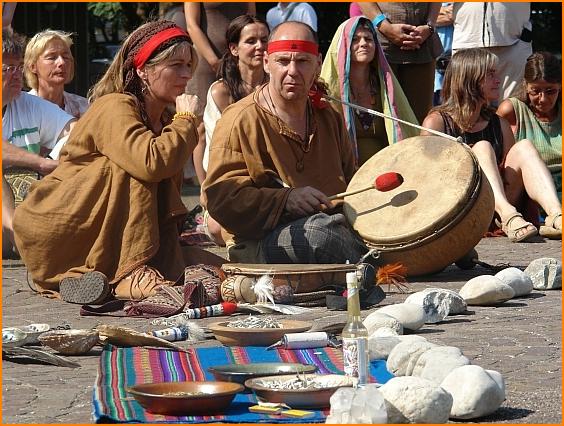 A circle of shamanic drummers opened in Karlsruhe, Germany, in front of the Schwarzwaldhalle (Black Forest Hall) the 1st World Congress of the Indigenous Grandmothers for Health, Awareness & Healing the Earth „13 Grandmothers – Be part of the Change!“. Picture: Heiderose Manthey

While on the square in front of the hall shamanic drumming set the mood on the worldwide union for prayer and healing of the earth, the 13 grandmothers prepared themselves for a consciousness-awakening-marathon from 19th until 21st July 2013, spreading out from Karlsruhe for the whole of Europe, for the whole world. The message of 1032 years of bundled grandmothers’ wisdom: „Bless your water and teach your children to bless the water. We all come through water on this earth, and without water, we have to leave this world.“

It is not amazing for insiders that this 1st World Congress takes place in Karlsruhe, Germany, of all cities. Already in 2004 during the 1st World Congress of Healers in Graz, the leading spiritual elite of the world announced that Karlsruhe and surrounding areas will be the epicenter of spiritual growth and that world piece will come from Karlsruhe.

In 2004: 1st World Congress of Healers in Graz and foundation of the International Council of 13 Grandmothers

While Grandmother Agnes Baker Pilgrim is celebrating the first ritual „Inflamation of the holy flame“she vividly advises to LOVE: „We are the voice!“ She appeals to us: „We want clean air and clean water for our children. Protect this world of yours. ahou!“ Picture: Heiderose Manthey

If we are to believe in this intuitive knowledge, also the year of birth of the Council of 13 Indigenous Grandmothers may be understood as part of this peace initiative. It is precisely the year 2004, when already the 1st World Congress of Spirituals takes place, that the International Council of Grandmothers is established. The 13 grandmothers were lead together thanks to the power of their visions and prophecies. This power is based on the fact that their spirits are deeply connected with each other.

Their goal is the revival of world peace symbolized by the inflammation of the Holy Flame which stands for understanding, cohesion and the preservation of the respective traditions. The 13 grandmothers followed this appeal and met for the first time in October 2004 at the global meeting of women in Menla Mountain Retreat in the state of New York. 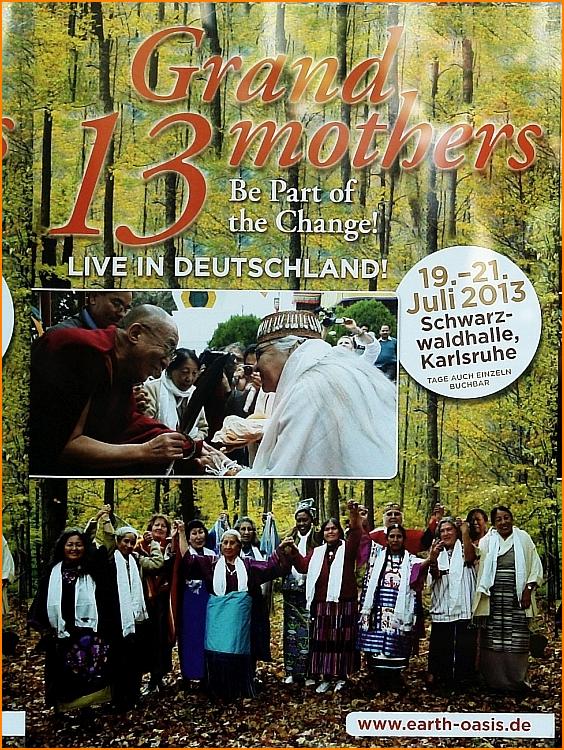 13 Grandmothers – Be Part of the Change! The intention to create world peace comes now with the 13 Indigenous Grandmothers to Karlsruhe.
Photo: Heiderose Manthey

Earth-Oasis has now gathered all 13 grandmothers for the first large joint grandmother event in Europe: „The loving respect and the deep connection with each other makes this International Council of 13 Indigenous Grandmothers a mighty and at the same time deeply touching voice of wisdom for all open-minded people on our earth.“ (1)

Seven grandmothers from Germany and Switzerland had the idea, together with Udo Grube from Horizon, to invite the grandmothers to Germany. These European grandmothers are mainly to be found at the natural power places like the “Extern-Steine (2) and in the Teutoburger Forest”. Thus one of these German grandmothers held with moving words her opening speech focusing mainly on the initiation of the grandmother-energies in Germany: Animals and stones are our brothers and sisters. Patron of the event – hosted by Earth Oasis – is the actor Ralf Bauer.

From the Arctic circle, from the Amazon, from the deep forests of the Northwest of the United States, from the North American Prairies, the Mexican highlands, the Black Hills of South Dakota, the mountains of Oaxaca, the South American desert, the Tibetan mountains and from the central African rainforest

„The grandmothers are coming from many different nations with different spiritual traditions. But all of us were told that we have to shake up the world population by warning against these disastrous consequences if we do not change our way of treating each other and our way of treating Mother Earth. The council of grandmothers is connecting with all people who share this far-reaching vision and who are willing to show mankind the way to a healthy and lasting world for the next 7 generations.“ (3)

The strongest vision is the power of conviction

The strongest message is probably the power of conviction of each of these grandmothers who each of them opened the hearts of all attending guests in the hall with powerful messages:

„Our Creator gave me a voice so that I can speak for those who do not have a voice and these are the animals, the water, the air, Mother Earth, Grandfather Fire and everything beyond.“, says Grandmother Agnes. 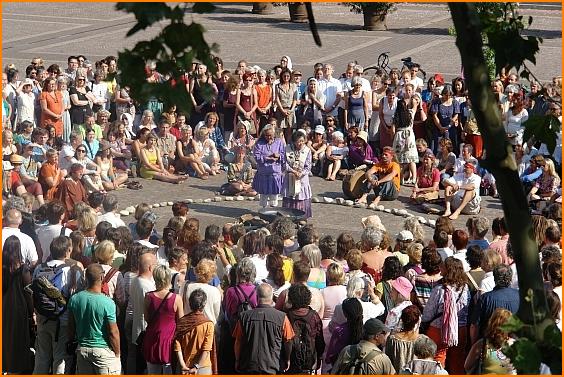 The seriousness of the intention

The protection of the water is for all grandmothers in unison in their most heart. Their mission: All our babies are babies of the water. Water is the first medicine. Water can hear, the water within you can speak. Bless the water every morning, like this you are blessing yourself! Thank the spirit of the water.

Water and fire rituals of inauguration underlined the faith and the seriousness of the message of the 13 grandmothers during the entire congress.

13 Grandmothers – Be part of the change 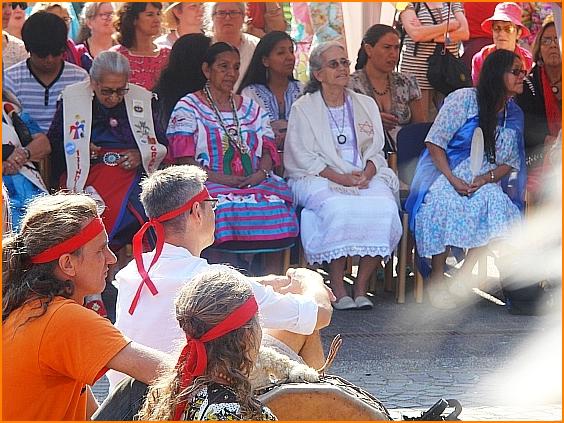 The International Ambassador of the Council, Pauline Tangiora from New Zealand, is talking about the tasks of the Council of the 13 Indigenous Grandmothers.
Picture: Heiderose Manthey

Statement by the International Council of 13 grandmothers

“We are thirteen grandmothers from the indigenous cultures who met for the first time from 11 until 17 October 2004 in Phoenicia in the state of New York, USA. We came from all directions in order to meet in the Land of the Iroquois. We came from the Arctic Circle, from the Amazon, from the deep forests of the Northwest of the United States, from the North American Prairies, the Mexican highlands, the Black Hills of South Dakota, the mountains of Oaxaca, the South American desert, the Tibetan mountains and from the Central African rainforest.

Our common Vision of a new global Alliance brought us together. We are the International Council of the Grandmothers. By means of our associating with each other our voices became one voice. Our connection is characterized by prayer, education and healing of Mother Earth and all its inhabitants.

We are deeply concerned by the destruction of the earth; the poisoning of the air, the waters and the earth, the atrocities of war, the threat of nuclear weapons and nuclear waste, the increasing poverty, the prevailing culture of materialism, the epidemics that threaten humanity, the exploitation of the indigenous people and the destruction of indigenous ways of life.

Names and origin of the 13 Indigenous Grandmothers

The first audible drumming as invitation to the next meeting of the International Council of the 13 Grandmothers in Black Hills, South Dakota, USA. Picture: Heiderose Manthey

„Our Mission Statement: We represent a global alliance of prayer, education and healing for our Mother Earth, all Her inhabitants, all the children, and for the next seven generations to come. We are deeply concerned with the unprecedented destruction of our Mother Earth and the destruction of indigenous ways of life. We believe the teachings of our ancestors will light our way through an uncertain future. We look to further our vision through the realization of projects that protect our diverse cultures: lands, medicines, language and ceremonial ways of prayer and through projects that educate and nurture our children“