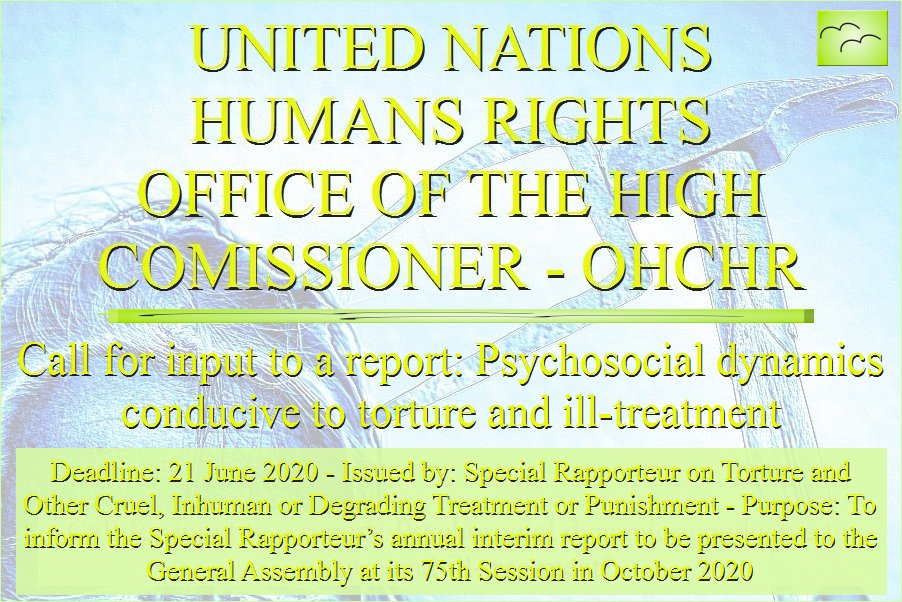 Purpose of submission: Information on the special rapporteur’s annual interim report to be presented to the General Assembly at its 75th session in October 2020. Foto: Heiderose Manthey.

1933-1945 Dehumanization of the victims of abuse of power and arbitrariness by German Nazi administrations and Nazi justice as well as their assistants from the medical profession and so-called followers of normal citizens who followed the sick Nazi ideology voluntarily or under coercion of the Nazi regime. Seducing the people to hatred and incitement against disagreeable people, also through the equalization of the entire German press. People were declared as persons in order to legalize mistreatment, tyranny and barbarism.
1945-1949 Denazification was only partially implemented by the Allies.
1949-1990 In both German states, GDR/BRD, sick Nazi ideology survived in the minds and actions of officials, as well as in the codes of law. In the FRG hardly any Nazi perpetrators were persecuted, rather protected, see The Rosenburg File (Part 1 until 1949-1973, Part 2 is still missing) up to 70% former Nazi judges in the German judiciary. But the deep state in both German states persecuted dissenting citizens extremely, in the GDR the Stasi-Decree 1/76 was often used to break the will, instead of implementing the general human rights declaration correctly.

1990-2020 After the affiliation of the GDR, the Stasi-Decomposition Directive 1/76 was applied in the whole of Germany, the officials boast of the good results without any awareness of injustice. The German judiciary still collectively denies access to fair trials as well as effective complaints of human rights violations through alleged compulsory legal representation in court and lack of victim support such as legal aid. Whoever complains to the judiciary or even reports offenders to the public prosecutor’s office, often puts his life in danger in Germany, example: out of 1000 criminal charges against offenders only 2 are prosecuted, but about 230 complainants receive a counter-indictment for libel etc., which the public prosecutor of course pursues ! Judicial independence and impartiality is no longer recognizable in the German judiciary, if administrative acts contrary to human rights are decided, the judge usually follows the office. The victim often has to expose himself to a kind of judicial inquisition, which often leads to the complete loss of rights of the victim of the justice/authority, so children are taken away from their parents without any reason, sometimes judges try to incapacitate victims or otherwise deprive them of their human rights by means of faked intentional false expertises (about 80% of expertises are faulty), up to the admission to today’s German forced camps/children’s homes with subsequent treatment with psycho-poisons. Damage for the rest of the life is to be expected.

In keeping with the Nazi ideology of dehumanization, German officials who have taken the oath of judgement and the oath of office on the Basic Law do everything in their power to search for reasons why they do not have to comply with the Basic Law and are allowed to deliberately harm citizens with their eyes wide open in order to pretend that they have a right to exist as a full member of the corps of associations. This collective normal madness in groups usually ends only after the end of the employment relationship.

Administration and justice, politics and even victims‘ associations remain inactive in official acts such as human rights violations and psychological torture in order to hand over innocent unwelcome citizens to extreme coercive treatment, so that years of permanent persecution and man-hunting are often documented.

In Germany there are only tortured people, but no torturers!

There is evidence of inactivity to stop psychological torture by:
a) Federal President Steinmeier and Gauck, because no answer is given when state violations of the Convention against Torture are brought to their attention.
b) Federal Chancellor Angela Merkel, also inactive, to order the cessation of all acts of torture, POGROME of German administrations and judiciary against their own citizens.
c) Federal Minister of Justice and Consumer Protection currently Christine Lambrecht, previously Heiko Maas and others previously, to start the prescribed investigation in accordance with the UN Istanbul Protocol if there is a first suspicion of torture.
d) Public prosecutors‘ offices in Germany refuse to initiate the obligatory investigation/enquiry if there is a well-founded suspicion of torture and other atrocities in accordance with Article 7 of the International Criminal Code (VStGB).
e) Judges collectively violate their oath of judgement with impunity if they fail to comply with their duty of investigation in accordance with the UN Istanbul Protocol.
f) The Federal Office of Justice and the Federal Ministry of Justice and Consumer Protection refuse to implement the Convention against Torture and permanently report no or almost no cases of suspected torture in Germany to the UN OHCHR.
g) The Federal Government Commissioner for Human Rights, Bärbel Kofler, remains inactive because she is not even allowed to accept individual cases.
h) Federal Foreign Office with Foreign Minister Heiko Maas , previously Minister of Justice, is only responsible for human rights violations outside Germany.
i) Federal Commissioner for Data Protection and Freedom of Information refuses to take measures to correct false state information about suspected cases of torture in Germany.
j) Federal anti-discrimination office may not take action in cases of official/judicial crime and refers to the judiciary and the independence of judges, who alone could grant human rights.
k) Recognition of victims in the ODABS victim database is prevented, as it only becomes active on the orders of the police or public prosecutor who have not previously pursued UN CAT violations by public officials or who themselves belong to the group of perpetrators.
l) There is no ombudsman system in Germany. Ombudsmen are employed public servants and only refer to the judiciary and judicial independence, which remains inactive when investigating torture and other atrocities committed by public officials.
m) German Institute for Human Rights (A-status at the UN) inactive, since the DIMR is not allowed to accept individual cases even in cases of torture. B status UN actors do not exist in
Germany.
n) Amnesty International and Human Rights Watch Germany inactive, as they are not allowed to work in their home countries. False annual reports from AI about allegedly no cases of torture in Germany are perhaps due to the financial support of AI by the German government.
o) Victim Support Associations such as Opferhilfe e.V. or Weisse Ring e.V. are inactive, as they are active in all cases of victim support, except for crimes committed by authorities and the judiciary.
q) National Agency for the Prevention of Torture as well as the CPT of the EU are inactive, as they are only allowed to work with detainees, furthermore the German National Selle for the Prevention of Torture is not able to work even with people deprived of their liberty, as it has only 8 employees, furthermore nothing is prevented.
r) EU usually remains inactive due to shared jurisdiction (D/EU) and refers to the German national inactive judiciary in cases of torture. Even the European Court of Human Rights hardly accepts any cases from Germany; for example, Judge Potocki only sends out readymade letters of refusal to the victims.
s) Torture investigation centres for documenting torture in Germany, such as the BZFO, Zentrum Überleben etc., are not allowed to undercut torture in Germans; they only become active in asylum proceedings for non-Germans.
t) Competent experts with the prescribed SBPM S3 certificate for the documentation of torture and other atrocities are not commissioned by German judges. Instead, the victim should adapt to the will of the judge and have himself/herself labelled as sick and diseaseunreasonable by biased willing experts on threat of incapacitation or forced admission instead of WHO ICD-10 Z 65.4. A German judge does not appreciate his own expertises, certificates proving torture and its consequences, because the independence of the judge does not oblige him to accept clear evidence as truth !

Germany refuses to comply with the Anti-Torture-Convention!
Ignorance of all evidence, hypocrisy of a functioning legal state, denial of Torture is NORMAL in Germany!
No independent investigation at first suspected of torture in Germany!
No Rehabilitation, No Remedy, No Kompensation to rebuild the lifes of Torturesurvivors in Germany, this time !