If I imagine how the „mighty“ of the World put their secret services on each other, how they spy on each other, how the super rich and those governments bound to them and therefore being dependent on them encrypt „secrets“ in order that their „opponents“ have to decrypt them again….., if I imagine that the leaders of the World are scared that the opponents they created themselves might attack and that therefore they deliberately start the preventive attack because of their fear or their greed….and if finally I realize how wars are being created, then we need a solution. Now.

Let us dare together having a look under the dresses of the mighty, under the dresses of those being dependent on them and those of their contract killers. „How amusing to see all these people naked“, could one think at first. How amusing if they attacked each other like this. No, it is not amusing at all, the current situation of all nations of this World is serious.

A One-World-Revolution of the 99 against the 1?

Are we facing a One-World-Revolution? The streets and places of many states bear witness of it. En masse people go out of their houses onto the streets, they band together, they show flags and banners, they roar loudly slogans, they yell, they sing and dance. There is a specific structure of rule which they do no longer want for their lifes: unfreedom, injustice and inequality.

But it is especially such a behaviour of people which leads to the appearance of the „controlling bodies“ of the mighty. The police, the military forces, the intelligent services  and secret services are already on the alert. Some of them are even attacking – brutally. They become contract killers.

How about the people on the streets? They no longer allow anybody to push them back into their cages, into their poverty, into their sickness, into their dependence on the former system of salary and service, into human exploitation, not to mention the exploitation of their lands and their countries.

Why do the mighty do not set these people free?

„Governments“ in the form of „self-organisation“ can be built as well by citizens. We repeatedly have seen such constellations after revolutions and wars. For this there is neither the need for the super rich nor for those big pretenders revelling in supposedly political understanding.

Their political knowledge is not wiser and no more broadly than those of other citizens. On the contrary. Finance oligarchs and contract politicians have not yet faced the polarity of the financial and humiliating dependency like the citizens being financially squeezed and pressed. The caste of the rich and their „political“ figureheads and henchmen are in fact missing an experience which those dependent on salary and power structures had to go through bitterly throughout their entire lifes.

So why don’t the mighty let people live in freedom?

Every human being can only be set free by him or herself.

Who are the ‚poor‘ on this earth?

It is as easy as that: It’s the super rich, it’s the mighty, the lawyers, solicitors and judges, the officials and the civil servants. They are stuck deaper than their head goes in this system which they still keep upright.

Let’s ask them if they do like what they do – being guard and driver of the slaves – from the bottom of their heart!

Maybe a member of a monarch dynasty would prefer being a cook for a Youth Centre.

Maybe a soldier would prefer being a Healer.

Maybe a contract killer would prefer being a protector of children.

In reality, the souls of those who posses most of the money on this Earth, are all alone.

The rich do not even know if they had friends if they did not posses any money.

If someone loved them at all if they did not posses their wealth.

If they were respected if they did not have any power.

In fact none of them can trust anyone within their environment.

They grew up with mistrust which was put in their cradle, with the mother’s or nurse’s milk they absorbed this attitude to life. Those with money power and the leaders cannot even trust their husbands or wifes because they can never be sure if this man or this woman at his or her side is being paid by their opponents or to which party they really belong to. None of them really knows. None.

They cannot even be sure if they may be ‚intimate‘ without being filmed and they do not know if their special likings are being shown on screen for educational purposes of special agents, already while being intimate, in order to serve as a tool of power against the opponents.

No sign of to make love or to love each other from the bottom of the heart! The game of love to create new life is already poisoned with the energy of being observed and spied.

The money and the scrambling for security have reached such a high and mad significance that the rich and the mighty spy each other, threaten each other or even kill each other for preventive purposes because of their fear not to be rich enough in order to dominate or eliminate their competitors. Just for the sake of their miserable fear.

The pitiful and the miserable. Who is getting these people out there?

There are two ways: They come all by themselves. Or we make an offer so that they can come.

ARCHE begins today with an offer.

The offer that ARCHE makes to all those (pretending to be) mighty of the World, to their executive politicians, to their police and soldiers, to their contract killers:

The way: Self experience and self-empowerment

Like many other Awareness Centres, ARCHE offers as well possibilities to train and develop ones‘ self.

You are very welcome to come to the ARCHE and to attend the Open Working Group.

Here everybody can win back step by step one’s own power which he or she gave away long ago.

After that you no longer need any servants and slaves which you have to buy in order to have them earn the money for you, to fill your banks or to protect you. You never even could be sure of this protection.

Be aware of the fact that servants and slaves are never friends. They are just servants, nothing more.

Imagine to set free your servants. Then and only then this human being, apparently subordinate and dependent from you, may become your friend. Like this you may win this person. Yes, like this!

And you, servants and slaves, imagine to set your ideologically indoctrinated masters free. Then and only then, this human being, apparently superior to you and apparently dominating you, may become your friend. Like this you may win this person. Yes, like this!

People who choose to go the way of self-empowerment are most welcome to attend the Open Working Group EKO-FREE in order to go these steps together with us.

Plus: The UNIVERSE is showing to all of us our way, if we ask for it. 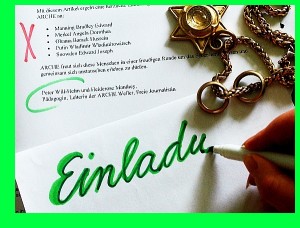 With this article ARCHE extends a warm invitation to a peaceful and relaxed cup of tea at the ARCHE to:

ARCHE is very happy to welcome these people and have a peaceful exchange with them in a joyous round sitting for instance at a nice fire. Representatives of the governments of Egypt and Syria and others are as well very welcome.

Neue Wege – Neues Leben am Beispiel von TamanGa in der Steiermark (New Ways – As an example: TamanGa in the area of Steiermark in Austria)

Many other Awareness Centres do exist worldwide. Please find out yourself.