Report to the International Criminal Court in The Hague

The battle against our destruction, destruction of our children and against years of burnout, helplessness and torture

Weiler/Malta/Gießen. Today ARCHE e.V. is publishing the form for the report which has been prepared for weeks. It has been developed for parents, grandparents and every relative who has been isolated from a child/children, grandchild/children, nieces and nephews based on absurd decisions. This isolation accompanied by the break off of bonding causes great pain and suffering and therefore fulfils the element of torture.

The factual situation of torture will be reported to the ICC. Now the International Criminal Court is in charge. We are reporting!

Factual situation of torture is full filled acc. to article 1 of the UN Convention against Torture

The study of Prof. Dr. Dr. Ursula Gresser: “Almost every victim has given a statement to have suffered and still suffers from physical or psychical pain. This fulfils the factual situation of torture acc. to article 1 of the UN Convention against Torture.”

Isolation of children is violence against children and against their families! These crimes have been reported nationwide to German politicians and authorities in charge, to the German President and the German Chancellor. There was NO significant change to avoid the violence caused by separating the children of their primary bonding.

The European Parliament has also been informed several times. Petitions took place. A delegation of MEPs visited Berlin two times in order to draw attention to the cruel proceedings of the Jugendamt and German Justice, to aim for a change of mind and a change in proceedings for the children.

Germany has problems of administration and discrimination.

Austrian MEP Angelika Werthmann: „Children, no matter where in this world, have the right to have mother and father”.

Austrian MEP Angelika Werthmann: „Children, no matter where in this world, have the right to have mother and father”.

The Austrian MEP Angelika Werthmann mentions problems of discrimination and administration….“I was part of the delegation in Berlin and I am aware of the problem“. Listen to the statement of Angelika Werthmann in Report of the Commission for Petitions time line 58:00.

“There was no reaction of the Government”, the French MEP Philippe Boulland remarked. Several times he called the German attitude “DENIAL OF ASSISTANCE”.

This attitude of the German Government is reflecting – up to now and deep down – to the lowest authorities. Victims of kid-eke-pas do not receive ANY HELP AT ALL but are treated like the “scum of the earth” by authorities. Victims are incriminated, forced into psychiatry and chased in a way which is hard to survive.

Bouland calls this an „Administrative Machinery“, against victims of child abduction.

The crime will be revealed. This is the beginning of the end of the fear. Remember the words of Dr Karin Jäckel  “Families in fear of a loud knock on the door in the early morning hours, swat style raids and the robbery of children”. This was today’s Germany.

Now the day has come for ARCHE e.V. to publish the form for the report1 to the ICC. 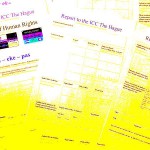 ___
1The report form was translated into English by Beate Kelly/Malta and counter-checked by Dr. Andrea Christidis/Giessen.